Machine Learning has been ascending in the Zeitgest for long enough that I'm probably behind the curve, but that wasn't going to prevent me from having a shoofty (apparently the most common spelling is "shufti" but never mind). Since python has been my programming home since at least 2009, scikit-learn was the obvious choice of tool. (unfortunately my projects folder's metadata got nuked during a file-transfer in 2009. Looking through now, my earliest verifiable python project was pyGenes, a Creatures 3 genome editor, which existed by 2005!)

Last year I bought Introduction to Machine Learning with Python along with a bunch of other Machine Learning books as part of a humble bundle, and had already read through it (though without actually writing any code myself... an activity which may be of questionable value) so I had a reasonable idea of what kind of toolkit it was. Having had the idea to attempt some ML project back then the key question was of course what I could investigate.

I didn't want to just play with the included data --- something done to death and quite boring, no matter how cool training handwriting classifiers on MNIST is (and anyway, you do this in coursera's Machine Learning course). But there are very few datasets that one already has that are suitable for the task, especially when one considers that I am far too lazy to hand-label more than about ten lines of data before getting bored and giving up. Unsupervised learning is always a possibility, but it lacks easily-quantifed metrics of success and there is the very real risk that you need genuine insight and intelligence to do something interesting. I thought about collecting League of Legends data and deriving stats and strategies from that... but many people are doing this already, probably much better than me and then I finally followed the advice of all my teammates over the years and uninstalled the game, so I also lost the personal interest.

Thankfully, a trusty piece of technology invented in the year of my birth came to the rescue: IRC. Thanks to Quassel I have chatroom logs dating back to 2012: millions of lines from thousands of people, all ready-labeled with all sorts of metadata and in a convenient Postgres database. Even my discord chats are routed through Quassel using bitlbee (I refuse to come back to Slack now they killed off the IRC transport) My first idea: predicting from lines of chat which chatroom it was said in. This already offers a bunch of routes of exploration in terms of pre-processing, model selection and tuning, and is just the kind of supervised Natural Language Processing classification task that people have been doing for ages.

In fact the scikit-learn documentation has a tutorial on text data which covers exactly this kind of scenario, only classifying BBS posts into their newsgroups instead of IRC messages into channels. Before I discovered this I had been fiddling around with textacy, but the key feature I needed from textacy for the initial experiments was a vectorizer (transforming text into a sparse array where a[i] = n means that there were

occurrences of the word with index

in some enumeration of words) and it turns out scikit-learn itself contains some options for this.

So for this initial project I set the following parameters:

The last one was something I decided I wanted to do early on --- if IRCUser42 is only present in #channel1, then any line that happens to be directly addressed to her (or mentions her name) will of course be easy to classify. We want to set the model a challenge!

Here's the code I used to train the model and print some statistics about it:

data and labels should be the lines of chat and channel names, which can be obtained from Quassel's backlog database, as numpy arrays. nicks should be a list of nicknames to filter from the text. We just use the Vectorizer's stop_words attribute for this so we could use this to filter out anything. It's worth pointing out that many nicknames are real English words. It would be crazy to filter those out, so when generating the list of nicks, we throw out anything in an English vocabulary list. This is the only bit of the process which is language-dependent.

A null model which just guessed one class all the time would score 20% so this isn't too bad, but it isn't great, either. It's worth noting that since the classes are (almost) equal in size, the accuracy score is a reasonable summary metric. It's no more important to correctly classify lines from #latex as coming from #latex than it is to, say, avoid incorrectly labelling lines as coming from #quassel. I was surprised that the grid search found that ngrams were worse than bags of words for accuracy. This means that the model was best able to learn purely from the vocabulary used in the different channels, and not from the patterns of words at all.

Running this gives us: 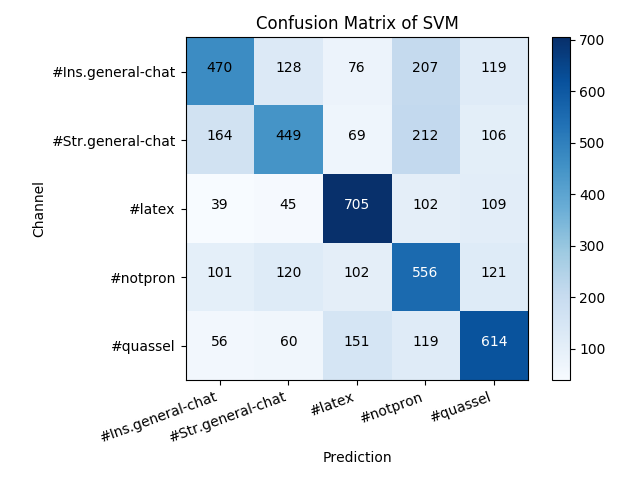 From this we can easily see where the model did badly and where it did better. #latex and #quassel were the easiest to classify — no surprise since they are technical support channels with the attendant unique jargon. The other three channels are general chat channels and harder to distinguish. #Ins.general-chat and #Str.general-chat in particular are both video game focused with overlapping user bases, so the fact they were the hardest to classify is also not surprising, but it's worth pointing out that they were both mis-labeled more often as #notpron than as each other, which is odd. While the two general-chats were less often mis-labeled as #latex, #quassel was more often, presumably because of general tech support vocab.

How can we improve the accuracy? An easy way would be to make the problem easier! Something you don't always have the luxury of doing but while playing around, why not. Reducing the number of classes makes things a lot easier — classifying between two channels got over 70% accuracy with no tuning. But this is pretty boring. On the other hand it's not unreasonable to feed the model more data at a time by concatenating several lines of chat. We can do this with the same data from the database as before, contained in rows:

Rerunning train gives us a test score of 63%, a marked improvement — especially since we didn't actually give the model any more data, just fed it more at once. If we instead retrieve more rows from the database to jam together, say 25,000 from each channel and stick together 5 at once, we get the following parameters and scores:

Oops, it looks like there weren't that many qualifying lines from the first two channels, though overall we are doing much better. A null model here would still only get an accuracy of 22%. You can see that the model hardly misclassifies anything as #Ins.general-chat (best precision) but misclassifies it as other things more frequently than any other channel. Nevertheless the recall is slightly improved compared to the situation with equal classes and less data. Let's visualise the confusion matrix again (normalised to the support): 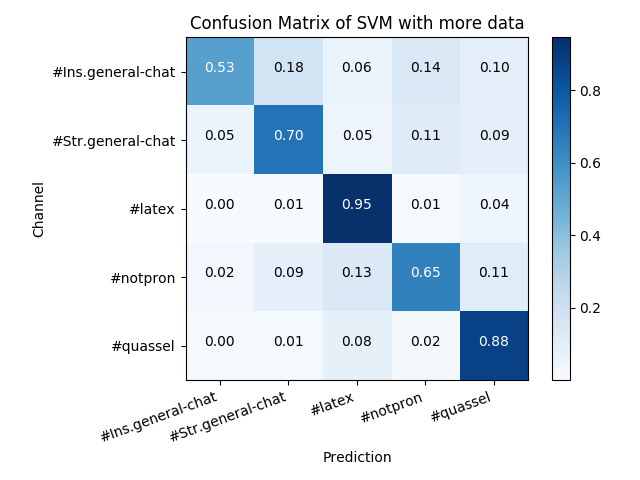 The cross-validation is still finding that ngrams don't help. This does mean that we can easily examine what are the most important words for classification. The SVM stores its coefficients under the coef_ parameter and we can get an idea of which words the model thinks are associated with being in - or not being in - each category by whether the corresponding coefficient is strongly positive or strongly negative. We use numpy.argsort to return the indices of the largest coefficients, and retrieve the associated word from the vectoriser with get_feature_names()[index].

A couple of things are obvious from this analysis: firstly, the long numbers. Some of these come from bitlbee (failing to) render discord roles so that "@Staff" turns into a long identification number for the "Staff" role. Others come from common URL components that discord re-hosts images under. It's tricky to know the best way to deal with these - on the one hand it seems to be cheating to use some computer-generated unique identifiers. On the other, filtering out URLs - or numbers - entirely seems over the top.

"url2title" under #notpron is a label that a bot in the channel uses when it automatically prints the titles of webpages participants link. This is therefore not representative of the human participation in the channel, and an enhancement could involve filtering out bots' messages. In that channel users can also type "!weather <location>" (the source of "weather" in the list) to receive weather information from the bot, which is the source of many words there. Some words in other channels also come from bots and bot triggers.

I chose not to lemmatise the words before training because I thought that different grammar patterns in different channels might help distinguish them. In a few cases this does seem to be the case, but mostly not. Here is an example where it makes a difference:

We see that the importance of the word flips in two cases, as well as changing a bit in others. The effect here is stronger than in most cases I checked, presumably because "training" is a completely different meaning from "a train." Rather than picking up different grammar, not lemmatising allows us to detect different meanings of words that might be squashed otherwise.

One last comment is that the #latex list is full of non-English jargon like "xetex" and "texlive," and even the real English words will be familiar to LaTeX users as being keywords in the language. Real language is littered with words that aren't in the dictionary, whether typos, slang or local jargon and it's not really possible to clean this up without removing the essential character of the chat.

All these factors affect my perception of the "fairness" of the exercise - a vague sense that when setting yourself a learning exercise you shouldn't make it too easy. Still, they are difficult to mitigate and don't really defeat the purpose.

Hi there just wanted to give you a quick heads up and let you know a few of the pictures
aren't loading correctly. I'm not sure why but I think
its a linking issue. I've tried it in two different internet browsers and both show the
same results.

I loved as much as you'll receive carried out right
here. The sketch is tasteful, your authored subject matter
stylish. nonetheless, you command get got an shakiness over that you wish be
delivering the following. unwell unquestionably come more formerly again since exactly the same nearly very often inside case you shield this hike.

Welcome to fishface.org.uk. I am a Post-Doc in mathematics and this is my corner of the Internet.